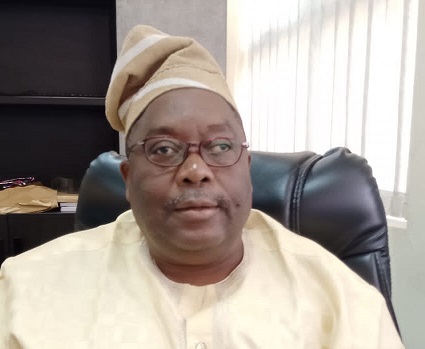 Engr. Kayode Odedina [JP] is a Scientist, an Engineer, an ICT Practitioner, an Educationist, an Administrator and a Quality Assurance Practitioner.

Engr. Kayode Odedina started his higher education journey at Ogun State Polytechnic, Abeokuta where he obtained ND in Electrical/Electronic Engineering with Distinction in 1982. He proceeded to Federal Polytechnic, Ilaro after 1 year of work experience at Ogun State Television Corporation, Abeokuta where he obtained HND in Electrical Engineering (Electronics Option) with Upper Credit in 1985. Engr. Odedina obtained his M. Eng. in Electrical & Electronic Engineering (with specialisation in Telecommunication Systems Engineering) of Anambra State University of Technology, Enugu in 1991. He also possesses an MBA in Technology Policy and Management of Ogun State University, Ago-Iwoye. Engr. Odedina holds a B.Sc. Degree in Information Technology of the National Open University of Nigeria as well as a Diploma in Management of Higher Education Institutes at the Galilee International Management Institute, Israel.

Engr. Kayode Odedina joined the services of the National Universities Commission in April 2002 as an Assistant Chief Hardware Engineer, rose steadily to the position of Deputy Director in 2010, acted as the Director, ICT in 2013/2014, redeployed to the Department of Open and Distance Education in 2014 as the Deputy Director, e-Learning

Engr. Odedina has attended various professional and management training programmes both within and outside Nigeria. He is duly registered with both the Council for the Regulation of Engineering in Nigeria (COREN) and Computer Professional (Registration Council) of Nigeria (CPN).

Engr. Kayode Odedina has won academic, professional and social laurels in the past that included the Commonwealth Scholarship Commission’s Professional Fellowship Award on e-education followed at the Commonwealth Telecommunications Organisation, UK.

To be the catalyst in the Commission’s quest to enthrone and promote best practices in the delivery of quality university education through the instrumentality of the open and distance mode, for the purpose of producing globally competitive entrepreneurial graduates who are relevant to National development.

The Department of Open and Distance Education seeks to regulate the quality of open and distance / Cross-border provision of university education  in  Nigeria,  in order to ensure that Nigeria optimizes these modes, in ameliorating the problem of inadequate access  and in fast-tracking  high level human capacity production for national development and global competitiveness in line with regulatory frameworks / guidelines  that Government may lay down (through the Commission) from time to time

Forge and sustain partnerships and collaborations with appropriate institutions in the public and private sectors within and outside Nigeria, to enable Nigeria derive maximum benefit from E-learning in the provision of quality university education in the NUS

GUIDELINES FOR OPEN AND DISTANCE LEARNING IN NIGERIAN UNIVERSITIES

GUIDELINES FOR OPEN AND DISTANCE LEARNING IN NIGERIAN UNIVERSITIES