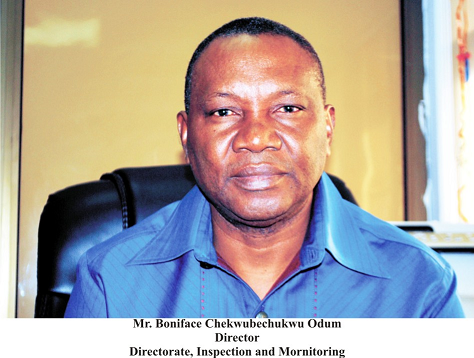 Mr.Boniface Chekwubechukwu Odum hails from Issele-Azagba in Aniocha North Local Government, Delta State. He obtained a Bachelor Degree of Education and a Master’s Degree in Industrial and Labour Relations (MILR) from Obafemi Awolowo University (OAU) Ile-Ife in 1987 and University of Ibadan in 1998 respectively.

Mr. B.C joined the services of the National Universities Commission (NUC) in 1990 and since then had a successful working career in the National Universities Commission (NUC). Mr. Odum’s working experience in the Commission cuts across different Directorates, from Management Support Services as a personnel officer, Student Support Services as head of Leadership Division and the Executive Secretary’s Office as the Deputy Director, Industrial and Labour Relations.

He was head of Secretariat for the FGN/University-based trade unions negotiations and Chief Protocol Officer to the former Executive Secretary, Professor Julius A. Okojie. He successfully coordinated the registration of the Nigerian University Pension Management Company Limited (NUPEMCO) as the desk officer. He was a member of the Governing Council, National Institute for Sport (NIS). A member, Board of Trustees of the University of Calabar Unified Pension Scheme, from 2003 – 2016.

In recognition of his commitment to duty, high sense of responsibility and unflinching loyalty, he was appointed the substantive Director, Inspection and Monitoring Directorate effective 1st January, 2019, a post he held until his appointment as Director Human Resources in August 2019.

To proactively create the conducive and enabling environment for the smooth execution of the Commissionâ€™s mandates through the strategic provision of the required administrative and human resource management support services.

To be the nerve centre for the strategic management of the commissionâ€™s human capital towards the successful accomplishments of its goals and objectives.

Consistent with our vision and mission statements, and within the context of the overall mission of the Commission, the statutory mandates or functions of the Department are:

The Division has the following as its statutory mandates/functions:

The Division is responsible for the following functions.

The functions of the Division are as follows:

The Discipline and Complaints Division, is  saddled with the following mandates/functions: